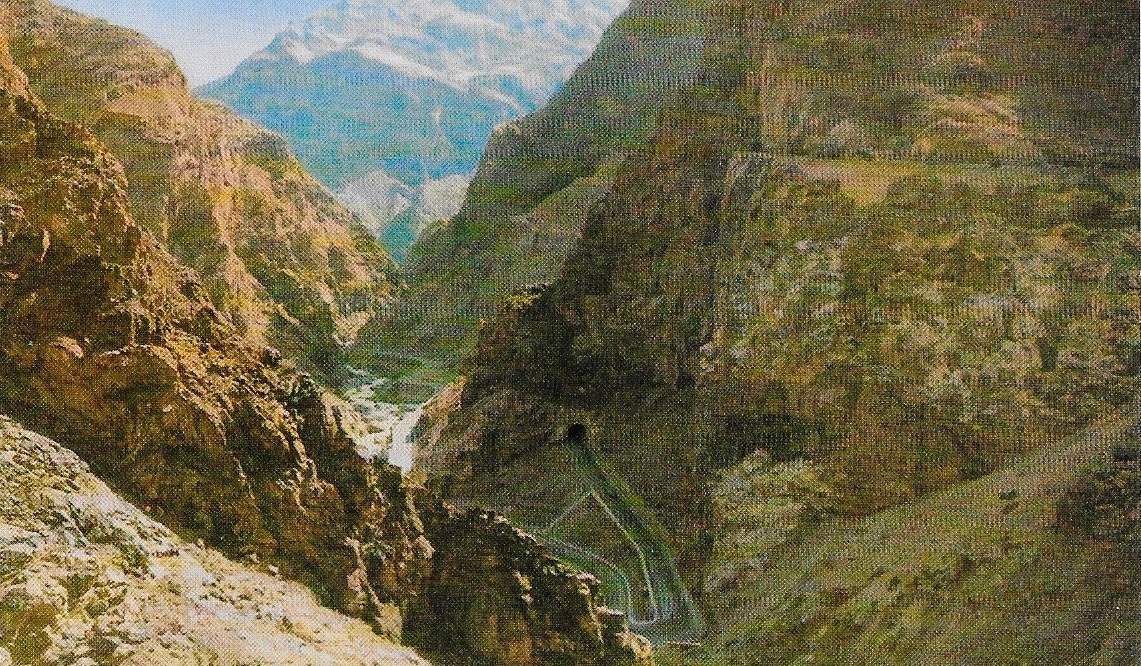 Cleaning the basement under Covid-19 lock-down seemed like a sensible thing to do.  Time to organize this space that had become a bit of a catch-all and generally ignored. There were bins of things – winter clothing and athletic equipment, tools and toys and stacks of books on various makeshift shelves to be sorted – those to keep, those to bring to Rupert. As befits any bibliophile that was the area I focused on.

It was a wonderful project in many ways, I picked up many books and admired their covers, skimmed through others and admired their contents and felt loathe to part ways. I came across dusty novels that I had bought with interest but had yet to read.  One of those novels was called The Afghan, by Frederick Forsyth. I put it aside as a keeper as thought it would be a welcome escape from the daily news of the pandemic. (And it was.)

My thoughts travelled to Afghanistan, a place that I had travelled to but that my father, mother and brother had visited in the fall of 1972 when I was away at school in Switzerland.  My mind drifted to that wonderful story of love and loss by Afghan-American author, Khaled Hosseini, The Kite Runner, which I read from cover to cover on a flight to San Francisco, landing with tears in my eyes. I thought also of the incredible book by Rory Stewart, The Places In Between, about his solitary walk across Afghanistan in 2002.  I completely forgot my original purpose of sorting books and got lost in the rabbit hole of memories.

I wandered over to a shelf with all my mother’s old photo albums and found the one with pictures of their epic journey from Delhi to Kabul on the historic Grand Truck Road, through the Hindu Kush and the Khyber Pass. My parents had always been great adventurers and were non-plussed about the possibility of running into dacoits or having the car break down in the mountains. In fact, they even let my 16-year old brother Guy do most of the driving!

Family photos show a very peaceful journey through the rugged and mountainous terrain where centuries earlier horse and camel caravans had trod, and countless invading armies had travelled.

The caravans in the 70s were of a different kind. Western youth travelling from Turkey to India in rickety buses, beat up cars or Westphalia vans to visit ashrams, seek enlightenment or simply chill on the beaches of Goa or on the streets of Kathmandu. Their mantra was peace, love and happiness. The route became know as the Hippie Trail and Kabul was a place where many lingered, and according to my mother they saw many lost souls on the streets of Kabul who had found opium and ultimately lost their way.

As I closed the photo album, feeling sad that I had missed this trip, I noticed tucked into the back of the album’s plastic cover, a newspaper clipping of a feature story my brother had written for the Peterborough Examiner on his return from his own year-long back-packing journey in 1980.

It is with Guy’s permission that I reproduce his story of the tragic events that unfolded in the then Democratic Republic of Afghanistan in 1979 and marked the beginning of 40 years of horrendous loss, oppression, conflict and destruction.

I regretted my early arrival at Heathrow almost immediately, having thought I could fill the hours prior to departure at 7 p.m. watching the miracle of modern air travel.  This proved interesting for perhaps half an hour after which time I was bored stiff and proceeded to pass the time aimlessly wandering about, reading the Sunday Times from cover to cover and watching other people aimlessly wander about.

At 4 p.m. I decided to check in, and where ten minutes earlier there was no indication that Ariana Afghan Airlines even existed, a counter was now open and besieged by about one hundred Asians, with mountains of luggage, screaming children and, by my standard, a more than adequate complement of relatives and well-wishers.

I had booked my flight with Ariana as it was the only discount flight to New Delhi, my ultimate destination.  London unfortunately is not the place to hang around, especially with the ever-increasing exchange rate of pound sterling.  The prospect of a stopover in Kabul was not particularly enticing, yet I was assured by their agent that everyone before me had made it. That was encouraging, but as they say, there is always a first.

Regardless, I waded through the kilos of extra luggage, checked in and waited in the departure lounge, cheered on by the “On Time” notice on the departure board.  I was soon dismayed by the announcement that, “due to unforeseen circumstances,” our flight was three hours delayed. No problem I thought, in air travel a few hours delay is a common enough occurrence.  However, as we approached our new departure time, I had a sixth sense that something was awry.   My premonition was soon confirmed.  Special announcement for passengers of Ariana Airlines to Kabul and New Delhi, “We regret to announce that the flight has been cancelled, etc., etc.

Transferred to a nearby hotel on our heavily laden bus we had word on the cause of our delay.  Apparently, the Afghan pilots had defected in Frankfurt.  It was later revealed that the entire crew had defected, completing a four-months operation in which 250 employees had sought, and presumably were granted, asylum in the West.  Unforeseen circumstances indeed.  Reading of our plight in the evening newspapers, I found The Guardian happily noted that “this leaves Ariana Airlines with only seven pilots and the airline is unable to maintain its schedules.”

Our night at the hotel was complicated by our “doubling up” and the fact that the airline ordered steak for our predominantly Hindu crowd, who would not eat beef if they would eat meat at all. However, the evening passed quite enjoyably due to the enforced camaraderie which these situations provoke.

After three meals of curried chicken (the hotel had learned its lesson) we were cleared for take-off by nine the next evening.  As an experienced air traveller, I have always had confidence in the crew, but for the first time I was a bit dubious about the competence on those on the flight deck.  The most senior crew member we watched board the plane, had a single strike on his sleeve.  With the acute shortage of pilots, we jokingly thought the purser had a sudden and unexpected promotion.

We flew into Afghan territory at dawn, witnessing a spectacular sunrise over the barren, convoluted terrain below. There was no sign of life and the steep-sided mountains seemed virtually uninhabitable.  As we approached Kabul, the mountain levelled off into a wide plateau with patches of green, where villagers could be made out. One wondered why this parched, impenetrable landscape was worth so much in the mind of invaders, both past and present.

At 8 a.m. we were over Kabul.  The first evidence of Soviet occupation was disconcerting.  Gleaming SAM anti-aircraft missiles surrounded the airport in circular formations, each missile surrounded by an earthen wall, seemingly aimed directly at Flight 702 from London.  Hugh pockmarks left by the “December 27th Revolution” surrounded the runway.  From 20,000 feet it was obvious that there was more below than just a passenger terminal.

As we circled the city, a brown, dusty earthen mass below, we noticed troop concentrations in strategic points.  Tanks, armoured cars and supply trucks in front of virtual tent cities. Construction of more permanent lodgings was underway, evidence the Soviets were definitely planning an extended visit.  The airport itself was overrun with military hardware: at least 50 MIG jets were “ready for takeoff,” helicopter gunships with mean missiles were scattered throughout, mobile radar stations and a huge tent city stood opposite the rather innocent-looking passenger terminal.  Aeroflot Russian transport planes were the only commercial aircraft in site.

Our two-week old DC-10 was definitely out of place.  In fact, a group of young Soviet soldiers, obviously impressed, posed for photographs in front of the aircraft with their awesome machine guns. Their handling of those lethal weapons, was to my mind just a bit slap happy. Disembarking, we noticed both Afghan and Soviet troops (distinguishable only by their red stars) keeping a watchful eye on the proceedings.  We noticed the traces of a sign which had obviously been hurriedly removed, proclaiming, “WELCOME TO THE LAND OF THE NEW MODEL REVOLUTION.” Presumably the new sign would welcome travellers to the even newer model!

In the terminal we shuffled from one terminal to the other for no apparent reason. A British UN official who travelled with us was being refused entry despite his armful of documents; solved only by a half hour discussion with the Foreign Ministry. He had described his life living in Kabul as constant tension, everyone waiting for the next rumor to be confirmed, venturing out only 200 yards from home and ducking beneath the window sill when shots sounded too close for comfort,

The only signs of previous U.S. influence, apart from the aircraft, were the antiquated Ford service vehicles, the inevitable bottles of Coke and Fanta, and a stuffed Afghan ibex supplied by Jones Bros., Taxidermists of Seattle.  The continuous screeching of fighter jets and the “Apocalypse Now” sound of helicopters made me want out and fast!

Several hours later, after several aborted attempts to board the plane and a security check which consisted of walking single file through the staff washroom, we were airborne again. I took a few clandestine photos as we circled above the camp and in two hours the 35-degree heat of Delhi was upon us.

What impressed me most about our short stopover in Kabul was not the military might, but rather the expression on the face of one of the stewardesses, as she took slow, resigned steps back to the terminal. She had chosen to return to her homeland, to a bleak future of occupation, oppression and war, which would undoubtedly continue for many years to come.”