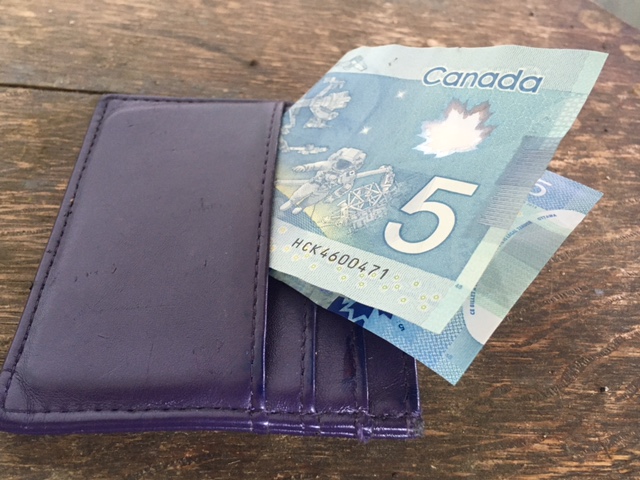 Lying in a small dark corner for several hours , with my blue extremities curled up against the wall, was really getting a bit tiresome, so I was delighted when suddenly the till opened with a ding, and the  brilliant morning  light came shafting in. Warm fingers  nudged at me, and my excitement intensified  as I was swooped up from my cramped resting place into mid air, and offered into the welcoming hands of a tall kindly faced woman who was standing on the other side of the counter, holding a red carton of milk.

‘Here’s your change’ said the soft-spoken young lad, as he passed me through the gap in the plexiglass. His charming and impudent smile illuminated the whole of the Lascelles corner store in the early morning light  ‘Six dollars and thirty cents.’ he said, as briefly, his hands brushed hers.

My new benefactor put me carefully into her wallet, where I had no choice but to cuddle up with another five dollar bill that looked a bit rough around the edges. Then, she gently thrust the other coins into the back pocket of her muddy jeans.

‘Merci,’ she said, connecting eye to eye once more, above the rise of her mask, ‘and you have yourself a nice rest of the day’.

Before she made her final exit, she glanced longingly one more time at the fresh coffee on the shelf behind him, and at the handmade crafted gifts that lined the wall. She had already spotted a selection of buy in bulk household cleaning concoctions, a healthy supply of locally produced food, and a vast and wide-ranging choice of mouth -watering beer.

‘Hmm’, I overheard her murmuring as she tore off her face covering and stepped out into the fresh village air, laughing out loud at the  gaggle of  chickens and ducks that were scratching and clucking  at her feet as we nimbled down the steps .“I like this place. For sure I’ll come back here on pay day when I have a bit more money on me.”

We then whisked off, down the road to where she was working at a neighbouring farm. We stopped there briefly and loaded up the back seat with a vast quantity of fresh luscious garden vegetables, oozing with health and beauty. The dirt road we drove on next was so bumpy that I had to hold on for dear life to the sides of her leather purse, until finally we arrived at the Wakefield Market. The place had an air of vibrancy and hope, and the crowds of people gathered there were smiling gleefully, and greeting each other joyfully, as if they hadn’t seen each other in a very long time.

“Yeah! It’s so good to see you!”  their voices would echo through their bright cotton fabric masks. “How’s all the family doing? It’s been so long!”  Sounds of laughter accompanied the strumming of live music, and hips were a swinging, while the overflowing produce all around us gleamed in the morning sun.

The next thing I knew, I was being handed to someone, in exchange for a basket of fresh local mouth watering strawberries, and I was unceremoniously shoved into a man’s wallet, in between a very unfriendly twenty dollar bill and a sleepy purple ten . Maybe it’s because they have the face of our monarch , the queen,  plastered  across their middle, or maybe it’s because their monetary value is four times  higher than mine, but I  quite often find that those green twenties behave in an exasperatingly superior manor, and often treat me with a general lack of common courtesy.

Mind you, I do wonder deeply about my own background, and try not to catch a shame tasting glimpse of my glossy image in the mirror. Whenever I do, I see the face of Wilfred Laurier looking back at me. He was the Prime Minister from 1896 to 1911 and I am pretty sure that he played a significant role in developing and promoting the hell of residential schools. Rumour has it that he may have even silenced any emerging murmurings and queries about the high number of deaths among the indigenous children who were forced to attend there.

Squirming in discomfort at this likely scenario, I look in envy at the back side of the ten-dollar bill that is staring up at me. I see the brave and determined face of Viola Desmond smiling into my two-dimensional eyes. She was a black civil rights activist from Nova Scotia and in 1946 she challenged the shocking policy of racial segregation while at a local theatre, by refusing to leave a “Whites Only” designated area.

I’m always so happy to snuggle up with a ten-dollar bill, as I get to be up close and personal with a committed woman who helped to bring about a shift in our history.” Do your little bit of good where you are,” was one of her notorious quotes, “it’s those little bits of good put together, that overwhelm the world”

I was so preoccupied by these thoughts that I have no idea how long I spent with my companions in that dark and humid wallet. Then, suddenly and with almost no warning , I was snatched quickly out of my warm nest, and handed over another plexiglass screened counter top to a languid and weary looking woman with a mask, a hair net that was covering her tidy grey hair, and an illegible name tag. I couldn’t see her mouth, but she smiled with her tired eyes as she poured  his desired “double double” into his bring- your- own- mug.  I then saw him leave the renowned and ubiquitous coffee establishment, clutching his caffeine fix lovingly, and wolfing down a handful of greasy donuts.

Meanwhile, I got hastily placed into an overflowing and noisy till that stank both of coffee and hand sanitizer. After a few moments, I began to feel quite woozy, intoxicated by the smell of the alcohol in the cleaning gel, and yet at the same time, becoming strangely agitated by all the stale coffee fumes I was inhaling. In the end ,the alcohol won, as it usually does, and I nodded off for a few minutes, before I was scooped up and  given again as change to  hurried woman who had just bought a brimming cup of hot orange pekoe tea. She then rushed out into the sunny evening air, gulping it down in throat- scorching haste.

“I’m going to be so late!”  I heard her growl from my spot in her shirt pocket, as she jumped into her rusty old Toyota. She ignited the engine (that made some very inappropriate noises) and we scooted off, back into Wakefield. Ignoring the speed limit, she burned the tarmac all the way to the bridge at the other end of the village, and then turned right twice before careering a short stretch, down another dusty dirt road. She pulled up, grabbed a bag and a yoga mat, and waltzed to the group of people who were gathered on the Covered Bridge.

The excitement was palpable. At long last, people were gathering to do something they enjoyed. Together. Not separately. Not in their living spaces, guided by a face on a screen, but rather assembled. In community with others. I was quavering with paper like delight in my pocket retreat, as they all lay down on their backs and the class began. A feeling of peace surged through me, as I was carried seamlessly into a Downward Dog, contorted into a Forward Bend, and then lunged headfirst into a Warrior. Perfect!

Around us, the bridge world was an active place, with bikes, and kids, and couples strolling hand in hand, and groups of young adults walking carefully through our twisting forms.   Adored dogs curiously sniffed at us, as they led their humans at the end of leashes. More laughter and joy filled the air, and we breathed it all in as we entered the final relaxation, melting into the wooden timbers that surrounded us, absorbing the OM as it vibrated through the air. I was hoping secretly that I would somehow end up in the hands of the yoga instructor, when at the end of the class, money changed hands. I was drawn to the sound of her voice and would have liked to inhale more of her warm strong energy. But no, the universe had other plans for this humble banknote.

Instead, I parted company with the shirt pocket, in exchange for a ball of delicious, piled high, calorie laden, sweet tasting, pink ice cream. This time, the turn around was super fast, and before I knew it, I was heading back on foot to the bridge, loosely stashed in the shorts of a young man who was gorging down his frozen delight. He was having a wild night out with his friends and I could hear him loudly challenging his companions as, burping, and swigging cans, they dawdled together towards the river.

“I bet you five bucks you won’t jump off this bridge” he said impulsively to one of his impressionable buddies who was striding beside him, as they entered on to the infamous and much-loved structure. “It’s easy. Watch me.  I do it all the time. It’s so cool. Look!”

He eyed the diamond shaped wooden sides, and driven by a need to appear brave, adventurous, and fun loving in front of his peers, he clambered up to a favourite perch on the bridge, leaned out with a downward  glance, and with a sharp  intake of breath, he leapt out into the beckoning flow.

At some point in mid air, however, we suddenly parted company. The momentum of his lurch dislodged his baggy shorts from his waist, and moments later he landed, with a healthy thud onto the water below, amid cheers and laughter, wearing only his superman underwear, and definitely five dollars poorer.

The shorts and I swirled  spectacularly down to the water below, where we hit the fast gurgling current, and were carried down stream, where I  floated carefree and relaxed, enjoying a respite from my busy life, until I was discovered, maybe by frolicking children,  or a passing boat, or perhaps by someone who really needed me.

And if it is you who finds me, please be gentle, and spend me wisely.

View all posts by hilary jocelyn