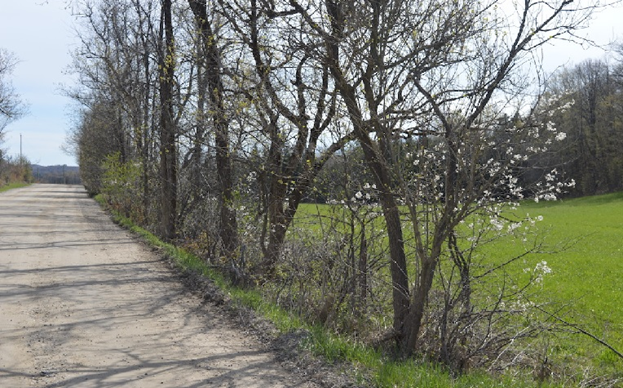 Not much has changed in the 30 years I have lived on Pritchard Road.  With the exception of one new house and a few new neighbours, this is a road lost in time.

There is evidence in the age and variety of wild apple trees along the road, the historic farm homes and century old barns; many now lost to a past generation.

Neighbours still ride their horses along the dirt road, and twice a year the farmer moves his herd cattle from field to barn.

This road is the home to an abundance of wildlife; deer, bear, fox and wolf.  The elusive cougar and moose have also been spotted over the years. The call of the palliated woodpecker echoes in the hills.

Recently, more and more locals have been enjoying this rural paradise — in a socially responsible and physically-distancing way; to exercise, to get some fresh air and to meet up with friends and neighbours. It has become the link in our community. With its undulating hills and valleys, open fields and forests, running streams and creeks, it has become an inspirational and spiritual place. A place of therapy, in this anxious age of over-reporting, misinformation, news specials, predictions and statistics.

All of this positive energy, unfortunately, is slowly becoming polluted.  There is one foreign, non-native species, which makes itself visible during this time of year.  It is most obvious just after the snow melts and before the wild grasses grow tall.  This is one brought here by mankind.  Thrown out of moving vehicles along the side of the road repeatedly, over and over again.  Who are the lazy and ignorant people tossing their litter out of vehicle windows in total disregard of the natural beauty of this place?

This does not go unnoticed. The other day, our friends were walking along lugging filled plastic bags along the road.  Over a couple of days, they had picked up 12 bags of litter.

Yesterday, on my 5 km walk, I spotted a small bear in an open field. After a long, hard winter in hibernation, this young bear was basking in the sun while foraging for fresh shoots and grubs along a swollen creek. I stood and watched in awe for several minutes.

Sadly, I also counted 134 pieces of garbage along the side of the road. Most were beer cans.

In the 1950s a Keep America Beautiful campaign was launched to encourage people to stop littering. It took off in the United States and Canada.  There was even a song, Don’t Be a Litterbug. Roadside signs were erected along roads and lanes, near lakes and rivers, in woods and on mountain trails. Maybe it’s time for a new campaign in La Pêche and a little respect for land, water and all who inhabit.